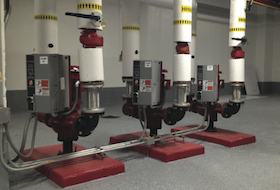 When the Twin Parks housing development was built in the Bronx in the early 1970s, it was hailed internationally for its architectural innovation and promise for urban renewal. Forty years later, as buildings in the scattered-site complex are being updated one by one, Twin Parks is again being recognized at the highest levels for innovation, this time for its focus on energy-efficiency.

Bell & Gossett pumps are integral to the inside-out retrofit of the first of the buildings, with the Series 80 ITSC vertical inline pumps selected for the transfer from an electric heating system to hydronic distribution. ITSC stands for Integrated Technologic with Sensorless Control, a feature that combines sensorless technology with the energy- savings of variable flow.

“We chose the Series 80 because its custom configuration options enabled us to use it in boiler rooms that were very tight on space, as well as in a larger boiler room the size of a dance floor,” said Bob Demarco, Vice President of Operations at Platinum Energy Group. “We laid out the whole job with ITSC prepackaged products, which resulted in faster, easier installation than using separate controls.”

Another ease-of-installation feature that scored high marks with the customer is the Series 80’s proprietary mounting flange. Pump installers do not need to use an additional fabricated steel base, saving time and money onsite. Matt Spink, National Service Manager for PEG, was impressed by this labor-saving design feature, as well as the simple startup due to the preprogrammed system parameters built into the drive.

“The ITSC is mounted and configured in our factory by trained technicians,” said Joshua Allen, Americas Product Manager, Drives and Controls, Xylem – the parent company of the Bell & Gossett brand. “It is fully tested and optimized under load in our advanced pump testing facility.”

The sensorless technology of the Series 80 incorporates a variable speed drive (VSD) without the need for a wired transducer. The VSDs will come into play in Phase II of the project, as the systems were initially set up without any control valves. “We were able to use a modified curve with the ITSC to fine tune the systems for lower horsepower use until control valves are installed,” Allen said. “Controllers will react to the system demands by varying speed, significantly reducing electrical costs compared to a full-speed operation and be in full compliance with ASHRAE 90.1.”

One of the buildings that received systems and aesthetic upgrades was selected as a 2014 Ebie Award finalist by the Urban Green Council, which recognizes improved environmental performance in existing buildings.

With the success of the first round of renovations, more projects are in the pipeline at Twin Parks. “They want to replicate exactly what they did in Phase I for all of the remaining buildings,” Allen said. “Bell & Gossett products delivered on energy efficiency, one of the driving factors in making infrastructure improvements to the buildings.” 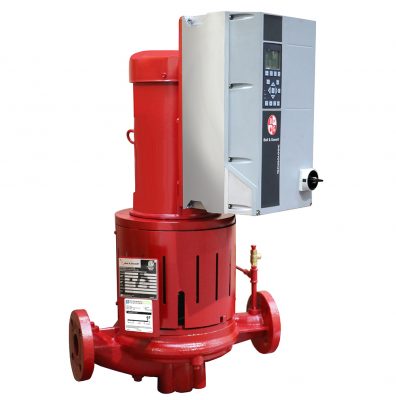