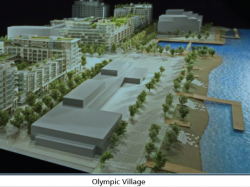 The 2010 Winter Olympics, held in Vancouver, British Columbia in February, 2010, involved unprecedented planning and coordination among many organizations and suppliers. Construction of the many Olympics facilities – stretching from Richmond, south of Vancouver to Whistler, in the mountains 75 miles (121 km) north of the city, began in 2004, and ITT Residential & Commercial Water played a major role in supplying water handling products at many of the facilities.

ITT is a leading worldwide manufacturer of engineered products used in plumbing, heating and refrigeration systems. The company’s Bell & Gossett and Goulds Pumps brand products are used in HVAC and plumbing systems at several of the venues that were home for some of the Winter Games’ most popular events. Working closely with the Vancouver Organizing Committee (VANOC), ITT was selected because it was the only supplier that could provide all the products and services in comprehensive packages for contractors to install.

The Richmond Speed Skating Oval is an excellent example of the facilities where ITT provided many different types of equipment from its broad product portfolio. The Speed Skating Oval has 8,000 seats and after the Games concluded, it became a multi-sport facility for a full range of winter and summer sports. ITT supplied pumps and controls for the heating and cooling systems in the Speed Skating Oval. Equipment included its Bell & Gossett brand pumps, heat exchangers and expansion tanks used in the heating and cooling systems, as well as its Goulds Pumps brand pumps and Aquavar® variable speed drive controllers used in the facility’s grey water handling system.

Another major facility using ITT products is the Whistler Nordic Centre which is near the Sea-to-Sky Highway that brought athletes and spectators from Vancouver to Whistler. Home to four popular Olympics events – crosscountry, biathlon, Nordic combined skiing and jumping – the Centre accommodates 12,000 spectators in each of the three stadiums at the site. Inside the Whistler Nordic Centre are two regulation ski jumps and 24 miles (39 km) of trails. ITT supplied Bell & Gossett pumps, heat exchangers and expansion tanks for this large complex.

The Whistler Sliding Centre includes facilities for bobsled, luge and skeleton events on Blackcomb Mountain. The track is 4,760 feet (1,450 m) long with 16 curves and is designed for speeds in excess of 80 mph (129 km/hour). ITT’s Bell & Gossett pumps are used in the heating system in the viewing area which accommodates 12,000 people, with temporary seating for nearly 6,000.

The UBC Winter Sports Centre replaced most of the former Thunderbird Winter Sports Centre. It now contains two international-size arenas for hockey and sledge hockey. The larger of the two arenas seats 7,000 spectators while the smaller arena is used for practice sessions. The original 1,200-seat main rink served as operations and media centre at the Games. Bell & Gossett pumps, heat exchangers and expansion tanks help enhance spectator comfort in the UBC Centre which includes a new fitness facility and a restaurant.

Thanks to ITT Residential & Commercial Water, both athletes and spectators at the 2010 Olympics were able to enjoy the events in comfort…and now the facilities will remain in use and continue to save energy for years to come.