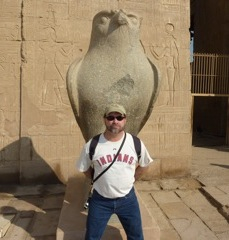 Michael Ivanovich, president, The Ivanovich Group, Oak Park, Ill.  Ivanovich has more than 25 years of experience in the buildings community as a chief editor of engineering publications, a research scientist, and, information technologist.  He can be reached at.

Image at left: Yours truly at the Temple of Horus at Edfu. Horus, depicted as a falcon, is the God of the Sky; God of War; and God of Protection.

My wife, Amanda, and I have long had “life goals” to visit Egypt and experience what many believe to be the “cradle of civilization,” where relics and structures date back to more than 5,000 years ago.

An opportunity came for us to go just after Christmas 2010 for about two weeks, so we made the trip. With a small group, we took a cruise on the Nile; rode camels to the Great Pyramids of Giza, visited the Sphinx and explored the temples and tombs of Luxor, Karnack, Abu Simbel, and many others (one of my favorites was the Temple of Sobek, the crocodile god).

All of the sites were fascinating and thought provoking. An Egyptologist was on hand to dispel myths, such as the Pharaohs didn’t use slaves to build the Pyramids; they contracted! And I didn’t know the pyramids of Giza used to have a polished external facing that fell away over the years; they were said to “glisten like diamonds in the desert.”

As vacations go, however, this was not one of relaxation as there were myriad logistical challenges, not the least of which were potable water and hygiene.

In terms of land mass, Egypt is about the size of Texas and New Mexico combined; However, it depends upon only one resource, the Nile River, for more than 90% of its freshwater. That’s one river supporting nearly all of the country’s requirements for arable land and quality water for crops, livestock, sewerage, cooking, cleaning, drinking, and industrial production.

Egypt is already one of the world’s largest importers of food, but water demand is expected to grow 20% by 2020.

For travelers, the water advisory for Egypt is, in summary, “Don’t let tap water or river water come in contact with your mouth.” This means conscientious showers; avoiding drinks served with ice; drinking water only from sealed bottles; eating cooked foods and fruits/vegetables that had been skinned; and liberal use of Purell hand sanitizer.

Back home, the differences in water culture remain with me in stark relief. The quantity of freshwater in the U.S. and the diversity and location of resources are astounding. Still, areas of the U.S. are chronically water-stressed and other regions suffer periodic droughts. And many urban cities have water infrastructures that are in need of rejuvenation.

For inspiration as to whether conservation and proper maintenance are worth the cost, visit Egypt. Short of that, I have placed some links to additional online information for more facts and figures on Egypt’s water situation.