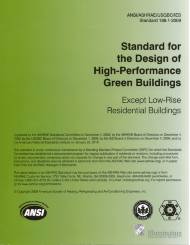 There has been a great deal of buzz recently about the new ANSI/ASHRAE/USGBC/IES Standard 189.1-2011 for the Design of High-Performance Green Buildings. However, since the new standard requires quite a bit of reading, we attempted in this blog to boil it down to the basic key elements.

As most of us know, ANSI/ASHRAE/USGBC/IES Standard 189.1-2011 embodies a collaborative effort to establish a design standard for high-performance green-building projects.  Written in mandatory, code-intended language, the standard was first published in 2009 and has recently been revised to incorporate new provisions and to include updated references to other ASHRAE standards.  The 2011 version has been adopted by the International Green Construction Code (IgCC) as an optional compliance path, so it’s becoming more and more important to know what the standard covers and some of its key provisions.

A good place to start is ASHRAE’s definition of high-performance green buildings (HPGBs), which stipulates minimum building project requirements. Similar to building rating systems, it covers many aspects of high-performance projects, ranging from site selection to water and energy use to material selection, without ignoring indoor environmental quality

When adopted into building codes, either directly or as an IgCC compliance path, this standard will help project teams consistently design the high-performance green buildings of the future.

Here are some additional links that provide information about this topic:

We’d be interested in your take on the new Standard.