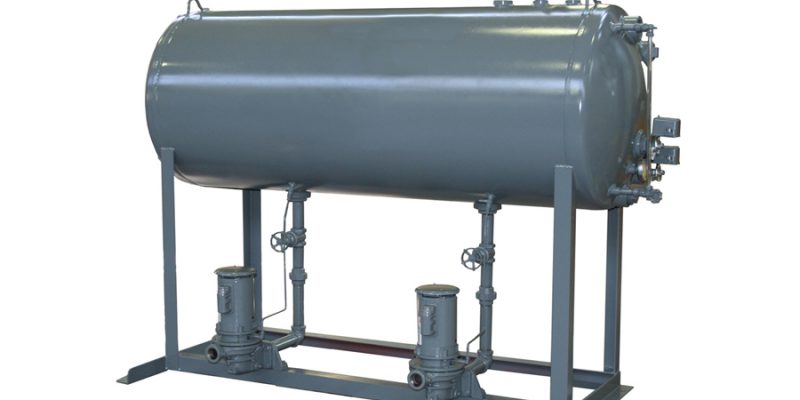 The following is a discussion of some of the more common discharge piping arrangements applied to boiler feed pumps. As previously discussed, use of a feed pump provides a reserve to feed the boiler, even when condensate is slow to return from the system. The economy of reusing treated water and feed water for its heat content is beneficial to the cost of operation, and reduces that amount of fresh water that needs to be added during heating cycles.

We will discuss five boiler feed piping arrangements that are adaptable to most low pressure boiler systems. Drawings are excerpted from the Section 190B document on our public website. 190B Bell & Gossett Domestic Boiler Feed Control

Drawing 1 DPD21-B below shows a single boiler with one pump for feed and a second pump for standby. Pump control for this arrangement is on the boiler, and is typically a single level of actuation for turning the pump on and off. Basic electrical control panels would typically include some type of starter or contactor with thermal overload protection to start the pump motors, and two auto-off-hand selector switches to determine which pump will be used as the feed pump. 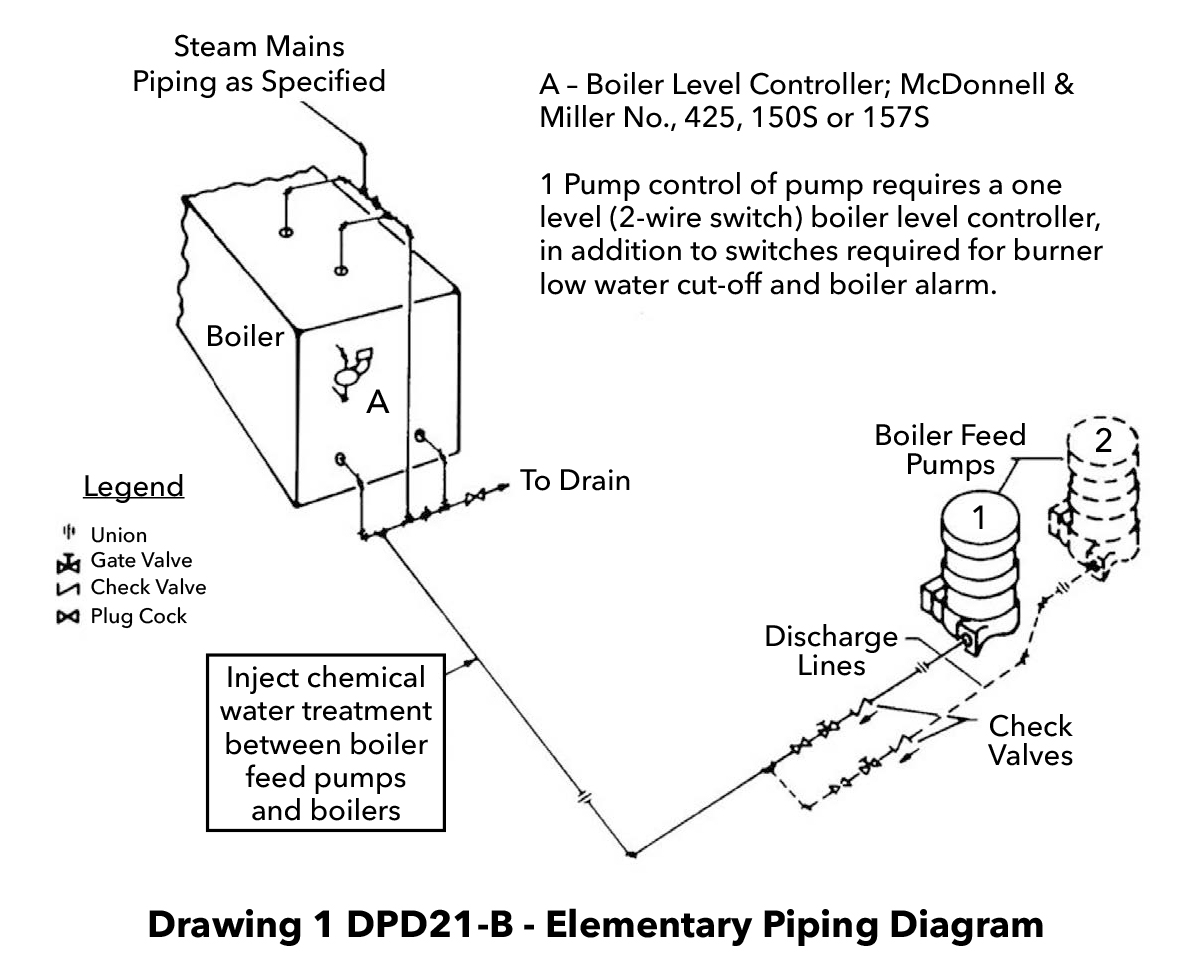 Another version of the same drawing (the C version) indicates that customers can set the unit for automatic standby if two levels of pump actuation that can be dedicated to pump control are provided on the pump controller. In an automatic standby situation, the level in the boiler would recede and the first set of pump control contacts would close to energize the first pump. If that pump either could not keep up with the demand for water or failed to energize as the level continued to fall, the second set of pump start-stop contacts would close and the standby pump would be turned on to assist in restoring the boiler water level. The piping is the same; only the control on the boiler and panel wiring change.

Drawing 1 DPD08-A shows two boilers with an automatic standby arrangement. In this arrangement, either pump can feed a boiler, with flow being directed to the respective boiler through some type of motorized, solenoid or proportioning valve. Pay special attention to the fact that, in this arrangement. each pump is sized for the total load of both boilers. Pump control for this arrangement is on the boiler, and is typically a two-level control. It typically controls the motorized valve, opening the valve to feed water into the appropriate boiler when the level in that boiler drops. An auxiliary switch associated with the motorized valve closes contacts to start a pump. If the level is restored in the boiler, the control will open, the motorized valve will close, and the auxiliary switch related to the valve will open and disengage the pump. If the level continues to fall in the boiler, the second set of pump control contacts will energize, starting the second pump. 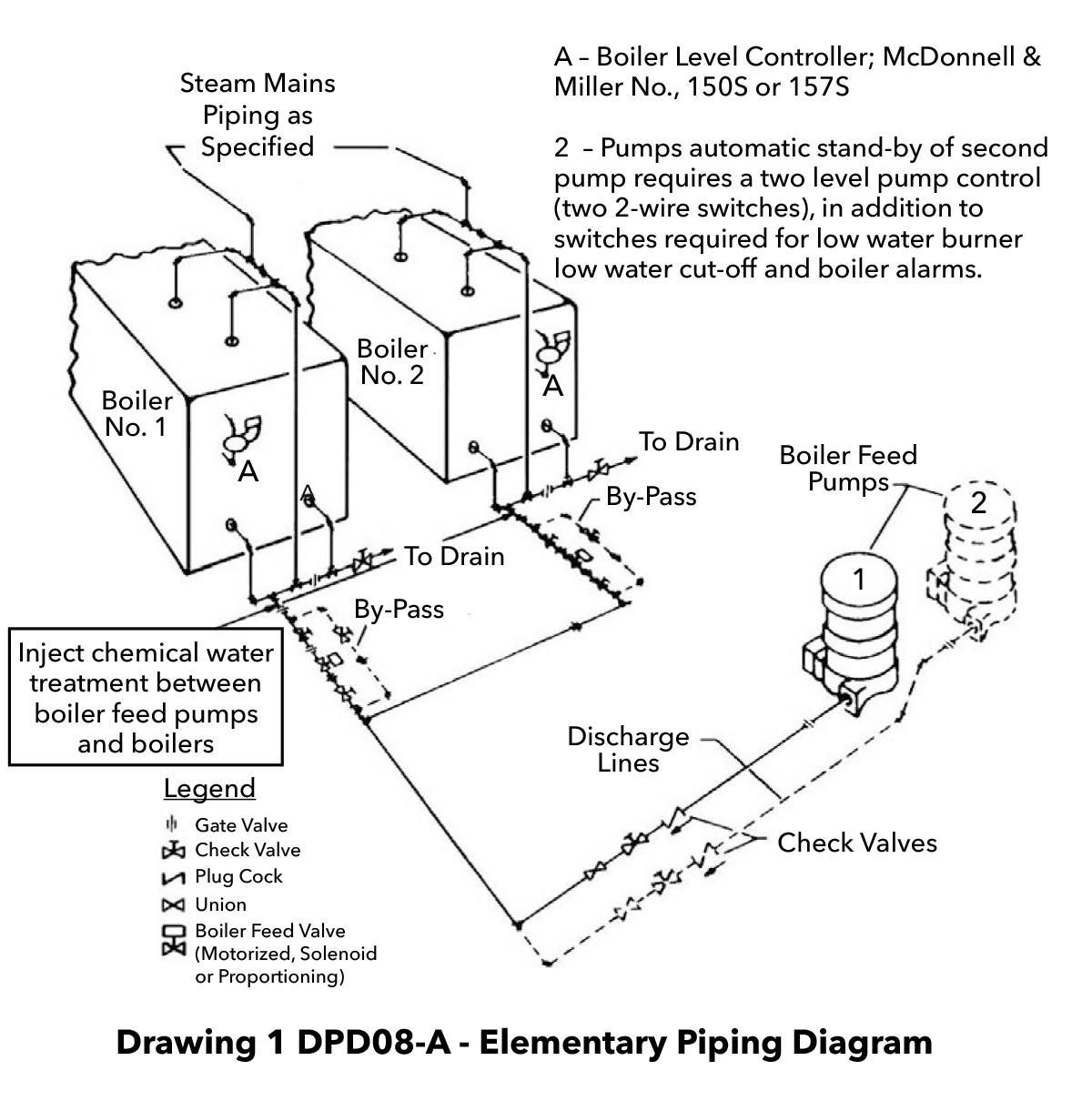 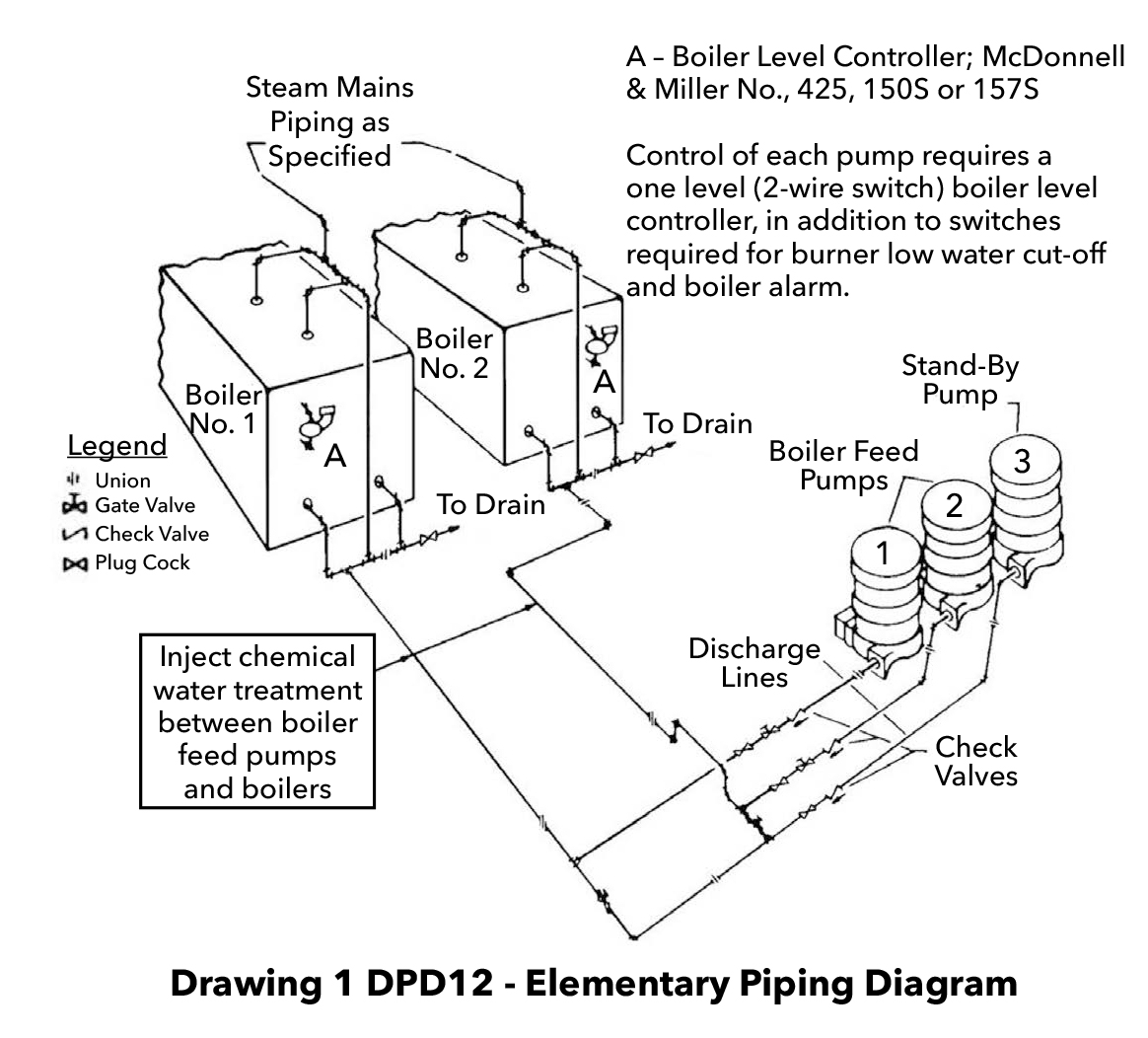 An automatic standby version of this drawing is also available in the 190B document linked at the beginning of this discussion. Automatic standby would require two levels of pump actuation, and motorized valves of some type between pump 3 and both boilers in order to direct the flow to the boiler needing water.

It is important to note that automatic standby selections always require two levels of dedicated pump control, and in many cases auxiliary switches or relays to start the second pump automatically. As systems become more and more automated and more complex – adding additional boilers or changing alternation to an automatic style, for instance – additional ancillary items in the control panel are required that can complicate system operation and drive up costs dramatically.

When designing or replacing feed systems, and completing selections using the factory selection software, remember that feed units require the completion of the boiler feed questionnaire. A manual version is shown on page 2 of the 190B document. The factory needs to know the number of pump control signals to be used. This is different from how many are on the control.

For example, a manual system that has a M&M 150S controller for pump control has two levels on the control, but only one is needed for the pump. The second level in the case of the manual system can be used for some other appropriate function. This, however, does not negate ASME CSD1-1 safety codes that indicate there should always be two low water cut-offs on a steam boiler. In the case of the manual system, you might opt to use the second level of the M&M two-level control for the pump to actuate alarm or burner cut-off. But there must be a separate and independent low water cut-off as well. In automatic systems where both levels of actuation are used, there must be two additional low water cut-offs to protect the boiler. There is a strong case to be made in many of these instances to subscribe to the KIS method (i.e. Keep It Simple).

If you have any questions on feed pumping systems, contact your local Bell & Gossett representative.