Beginning Jan. 27, 2020, clean water pumps sold in the United States must achieve a minimum energy rating of 1.0 as outlined in the Energy Conservation Standards for Pumps established by the U.S. Department of Energy (DOE) and adopted by Natural Resources Canada. Even though that number denotes compliance with the new standards, a compliant pump by itself is not a measure of an efficient hydronic HVAC system.

Specifying engineers intent on designing mechanical systems for commercial buildings that lower energy consumption, reduce maintenance and extend the life of system components must take a deeper dive into the DOE’s metric to ensure they are selecting the most efficient pumps for the application.

With an HVAC system accounting for up to 50 percent of a commercial building’s energy use, designing efficient heating and cooling systems is critical to keeping a project on budget as well as meeting sustainability goals. Variable speed drives often are applied to existing systems to increase overall efficiencies. When a VSD is installed properly, pumps can work more efficiently, thereby extending product life, reducing energy consumption and decreasing electrical system stress. 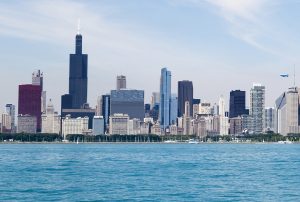 With HVAC systems accounting for as much as 50 percent of a commercial building’s energy use, efficiency is a priority in system design. A new Department of Energy pump efficiency standard is changing the way engineers select pumps for hydronic systems.

The pump industry has been working toward the 2020 compliance deadline for the last few years, with individual manufacturers weighing their options in terms of hydraulic redesign of pump lines, discontinuing certain models or achieving compliance on a noncompliant pump by combining it with a variable speed drive. The standard requires the efficiency rating of a basic model be based on the least efficient or most energy-consuming individual model. The DOE estimates that the least efficient 25 percent of pumps on the market today will be eliminated through this process by 2020.

Energy Rating tool
In order to compare the efficiency of pumps in accordance with the DOE standards, the Hydraulic Institute (HI), in conjunction with industry partners such as Xylem Bell & Gossett, have created an Energy Rating (ER) metric based on the DOE’s PEI. To use the ER label, pumps must perform to published performance data, be tested to DOE test standards in a Hydraulic Institute certified test lab.

The HI Energy Rating is similar to the ENERGY STAR program for household appliances. It provides estimated annual power savings for a specific pump along with the DOE-required PEI information. Products with the ER label are listed in a database on the HI Energy Rating Portal, http://er.pumps.org/ratings/search, searchable by manufacturer, model number and rating ID listed on the hydraulic energy rating label distributed with the pump.

Which PEI?
How should specifying engineers use PEI to maximize efficiency in a hydronic system and make informed decisions about using compliant pumps? The answer, in part, depends on the application.

In applications in which the load is constant — such as cooling needs in a data center — engineers could consider only PEICL. Making an apples-to-apples comparison of different pumps in the PEICL category will demonstrate differences in efficiency based on the PEI for each pump. The example below demonstrates how even a small change in PEI can have a sizable impact in efficiency.

Let’s compare two 5-horsepower end suction pumps. Pump A has a PEICL of 0.89, which is comfortably under the 1.0 standard. Pump B has a PEICL of 0.95 — still within standard, but not quite as efficient. 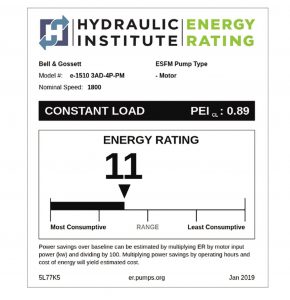 The bottom of the energy rating label provides information on how to estimate savings versus the baseline (PEI 1.0) end suction frame mounted pump. If Pump A’s motor is 90 percent efficient and operates close to 5 hp, input power will be 5.55 hp, or 4.1 kW.

Pump B with a PEI of 0.95 would have an ER of 5. Following the same calculations, this less efficient pump will yield less than half the savings annually than Pump A.

When demand fluctuates
In commercial building hydronic HVAC systems, the load varies depending the heating and cooling needs of the occupants. In variable load environments, applying a variable speed drive to slow down or speed up the pump to match system demand is the key to reducing energy consumption. Using the PEIVL metric, engineers can accurately compare products to ensure the most efficient hydronic system design. 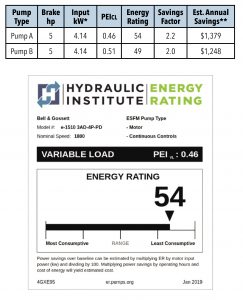 When comparing the same pumps from the first example on a PEIVL level, Pump A has a PEIVL of 0.46, well below the 1.0 baseline requirement. With an ER of 54, one could expect a sizable energy savings.

Pump B has a PEIVL of 0.51 and an ER of 49. Even though there are similar relative values between the constant load and variable load ratings, a pump with a PEICL of 1.01 — which is a failing number — could have a PEIVL at or below that pump’s 0.51.

That can make things a little confusing when doing pump comparisons. In order to ensure hydronic HVAC systems are being designed from the start with the most efficient pumps, engineers should look at both PEICL and PEIVL with key emphasis on PEICL to confirm that the pump they are specifying has a rating of 1.0 or less. If a pump requires a drive to meet efficiency standards, then it’s not going to be as efficient as another pump-drive combination that has a better bare pump rating.

Be aware that PEICL data may not be made available for every pump, meaning that it may not have been tested or may not be compliant. If the numbers are dramatically different and the pumps are similar, then you can be more comfortable with these comparisons. It’s also important to remember that the efficiency of those pumps in a system will be impacted by the load profile and how close the pump operates to best efficiency point.

Notice in the two examples that the PEIVL numbers are much lower than PEICL numbers. The PEIVL number is a power comparison against the baseline pump, which is the same constant speed calculation used in the PEICL number. This means that the PEIVL numbers will always be much lower than a PEICL number, considering the reduced flow and head points used in the calculation for variable speed. This makes sense, as in any situation with a variable load you will gain efficiency by utilizing variable speed. To optimize efficiency, you still want to marry that motor and drive with the most efficient pump.

In the second example, Pump A has a lower PEIVL than pump B, but that does not necessarily mean it will cost less to operate in a system. Different types of pumps have different baselines; engineers should be sure they aren’t making an apples-to-oranges comparison. Using a related example to illustrate the point, if the energy rating on a refrigerator is lower than the energy rating on a furnace, that doesn’t necessarily mean that the furnace will be cheaper to operate. 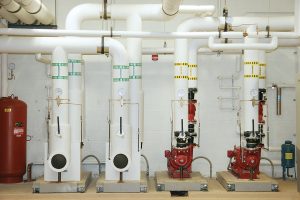 Beginning in January 2020, clean water pumps sold in the United States
must meet efficiency standards and include efficiency information on the pump nameplate.

Making use of available tools
The HI Energy Rating program has become an impetus for public utilities to put in place pump energy rebates as a way to encourage energy conservation. Pacific Gas & Electric (PG&E) public utility in northern California began offering rebates for pumps that exceed the DOE’s PEI metric, requiring pumps to meet a .96 value in February 2018.

The more stringent energy efficiency requirements of utilities such as PG&E — and likely the first of many to do so — underscore the need for specifying engineers to incorporate energy rating tools in pump selection and system design.

Bell & Gossett has been a leader in developing tools for the industry to support efficient pump selection, such as through its ESP-SystemwizeTM online selection tool that provides HVAC system designers the ability to choose all system components within a single integrated tool to ensure the most efficient hydronic system design.

Even though the PEIVL number considers loads at 100 percent, 75 percent, 50 percent, and 25 percent of flow, it won’t be an accurate comparison for all part load efficiency profiles. That’s because the curve used for calculating PEIVL has a specific formula for determining head at each of the reduced flow points, which won’t necessarily match the system curve for a specific design. Also, each of the flow points in the PEIVL number is rated equally. The Bell & Gossett guidance for weighting efficiency is 100 percent flow (duty point), only 1 percent of the year; 75 percent flow, 42 percent; 50 percent flow, 45 percent; and 25 percent flow, 12 percent.

When comparing pump efficiencies, it is always good to use selection software that has built-in cost estimation based on the load profile. That information, plus pump PEI data and ER data, is available on ESP-Systemwize.

We’re already seeing a snowball effect in regard to pump efficiency requirements — utility rebates are just one example — and more are to be expected as the industry continues its shift toward energy efficiency. The 2019 version of ASHRAE Standard 90.1, Energy Standard for Buildings Except Low-Rise Residential Buildings, is currently being updated to include verbiage requiring the use of DOE compliant pumps. Engineers play an important role in efficiency efforts; it’s critical they continue to acquire the necessary knowledge to design mechanical systems that set the standard for years to come.

Mark Handzel is Global Vice President, Product Regulatory & Government Affairs, Xylem Inc. He has 36 years of experience with pumps and related equipment and served as a member of the U.S. Department of Energy Appliance Standards and Rulemaking Federal Advisory Committee’s Commercial and Industrial Pumps Working Group and also on the Circulator Pumps Working Group.

Alan Jones is the global product manager for Bell & Gossett centrifugal pumps. He holds a bachelor of science degree in systems engineering from the United States Military Academy at West Point, and a master’s in business administration from Syracuse University. He is an ASHRAE chapter member focused on customer experience, energy efficiency, system integration and value generation. 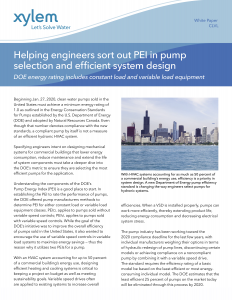 About Xylem
Xylem (XYL) is a leading global water technology company committed to developing innovative technology solutions to the world’s water challenges. The Company’s products and services move, treat, analyze, monitor and return water to the environment in public utility, industrial, residential and commercial building services, and agricultural settings. With its October 2016 acquisition of Sensus, Xylem added smart metering, network technologies and advanced data analytics for water, gas and electric utilities to its portfolio of solutions. The combined Company’s nearly 16,000 employees bring broad applications expertise with a strong focus on identifying comprehensive, sustainable solutions. Headquartered in Rye Brook, New York, with 2015 revenue of $3.7 billion, Xylem does business in more than 150 countries through a number of market-leading product brands. The name Xylem is derived from classical Greek and is the tissue that transports water in plants, highlighting the engineering efficiency of our water-centric business by linking it with the best water transportation of all – that which occurs in nature. For more information, please visit us at www.xylem.com.