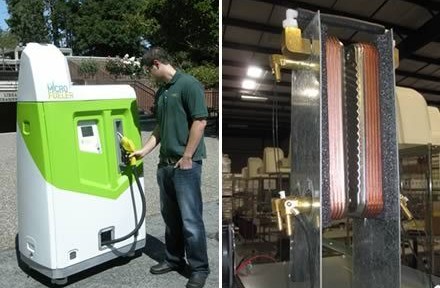 The MicroFueler from E-Fuel looks like a typical gas station pump — without the gas or the station.

This pioneering pump turns feedstock like cheap sugar into clean-burning ethanol fuel that emits far less greenhouse gases into the atmosphere than oil-based gasoline. It’s designed to be installed in household driveways and the parking lots of small businesses.

This is a revolutionary eco-product. Ethanol has been around for decades, but the MicroFueler lets people make it themselves — safely and for a lot less than they would pay for petroleum-based fuels at their local service station. A gallon of ethanol from this home-based pump costs about 50 cents plus the cost of the feedstock, which can include waste sugar, beer and wine. With the right, cheap ingredients, users can get close to $1 per gallon of fuel.

“Floyd has been driven to develop this technology for the past 30 years, and when he first started his quest in the 1980s, he used our heat exchangers for his earliest prototypes,” says Bob Taylor, regional sales manager for Xylem’s Standard Xchange brand. “As the MicroFueler took shape, he came back to us because he knew he could rely on our products and service.”

The MicroFueler is not a pipe — or pump — dream. Several years ago, Silicon Valley entrepreneur Thomas Quinn, who invented the motion sensor technology for Nintendo’s Wii gaming system, believed he could bring fuel production to individuals. He found Butterfield to help him do that, and E-Fuel was born.

With Quinn’s sense of what makes a winning product, the MicroFueler was made small, light and smart — with an internal Internet connection that remotely monitors the product performance and automatically “phones home” when the pump needs service attention. With Quinn’s financial backing, this new pump has moved into limited production and has solid, global growth aspirations.

Last year, California Governor Arnold Schwarzenegger held a press conference to credit the MicroFueler for ushering in the “dawn of the organic fuel era.” Even the waste produced by the MicroFueler is “green” — a slurry that can be reused as fertilizer.

And just recently, the government of India expressed interest in hundreds of thousands of MicroFuelers to help homeowners in remote areas produce their own cooking fuel.

“The potential is huge,” says Taylor. “The MicroFueler is the start of something big, and we’re proud that our heat exchangers are part of such an important eco-advance.” 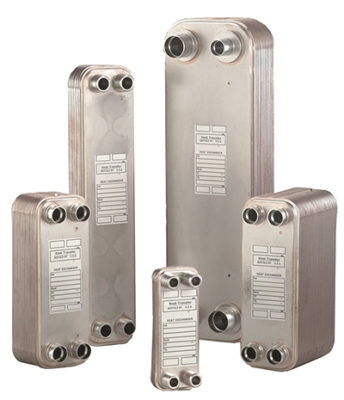